Home • Community heroes: Peel Regional Police have started to stock EpiPen auto-injectors at all their facilities

Community heroes: Peel Regional Police have started to stock EpiPen auto-injectors at all their facilities 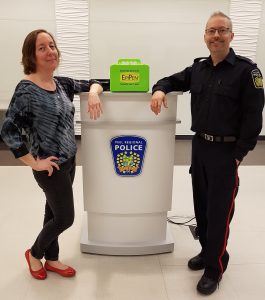 How did this initiative come to be?

This initiative was spearheaded by Ashley, whose second of three children has allergies to peanuts, tree nuts, and dairy. “I have more than the average awareness of what anaphylaxis is, and what epinephrine is useful for, so it’s an issue that is near and dear to my heart. But also, from a professional perspective, we obviously recognized there was a significant amount of risk if we were involved in a situation [where someone was having a severe allergic reaction] … and whether we could mitigate that risk.”

The idea for having stock epinephrine auto-injectors started in 2015 when Ashley was interviewing a child who started to complain of difficulty breathing and a sore throat. “We made some inquiries and it turned out that this child was allergic to tree nuts, and they didn’t have their epinephrine auto-injector with them,” Ashley said. “We were obviously concerned. We were able to monitor the child and determine what was going on. Luckily, it was not an anaphylactic reaction. But it got us thinking: If it was an anaphylactic reaction, what would we do? How would we proceed? And whether we were prepared for that kind of a situation.”

“I think the need for epinephrine is certainly a very real need, especially within the holding cell area”. It should be noted that having epinephrine on hand for emergencies is just one step Peel Regional Police takes as they continue to do everything they are able to ensure the safety of all those within our facilities. “Food is one of the main triggers for anaphylactic allergies, so it is important to have epinephrine in close proximity to where food is consumed. While stocking EpiPens is a great community initiative, it also mitigates significant risk for the police department.”

It was at that point that Ashley and Alexis started looking at having stock epinephrine in Peel Regional Police facilities. “Ashley did a lot of work with this. He really was the driving force behind it, I was just really happy to support him in the effort to help protect staff and our visitors,” Alexis said. 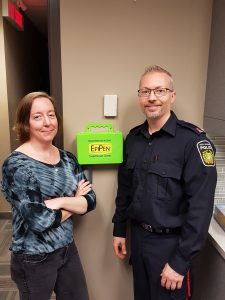 Now, when people enter any of the Peel Police facilities, including the five police divisions, the Peel Children’s Safety Village, or attending a Peel Police summer/March break camp, “All those areas are now protected with epinephrine, so if there is an anaphylactic reaction, we’re prepared,” Ashley said.

Although the Peel Police facilities stock both EpiPens and EpiPen Jrs., it’s important to note that individuals are responsible to always carry their own epinephrine auto-injectors.

When did the initiative officially launch?

A man with a peanut allergy was on a bus with the intention of going to the Peel Regional police station to do a background check. “He hadn’t had (an allergic) reaction for years, so he no longer carried his EpiPen, which unfortunately is quite common.” Ashley said. After eating several food items, the man began to feel symptoms of an anaphylactic reaction – coughing, nausea, a rise in temperature, and itchiness, particularly around his neck – so he started to Google those symptoms and discovered he was “most likely” having an allergic reaction.

When he arrived at the police station the man asked a fellow patron if his neck was red and said he thought he might be having an allergic reaction. That patron notified an officer who, along with a civilian employee, helped the man to a private area. The officer provided the onsite EpiPen to the man, who was able to self-administer the epinephrine. He felt immediate relief and then went to the hospital with paramedics, and he’s now very grateful to be able to tell the story.

Ashley explained there’s a bit more of a silver lining to the end of that story: “That individual now carries his EpiPen everywhere he goes.”

“We’ve had several cases of officers reporting that they almost used the stock epinephrine, but ultimately they didn’t have to. They’re still really pleased by the fact that they had it available in case it needed to be used,” Alexis said. For instance, there was an incident at Toronto Pearson International Airport, in which the on-duty sergeant accessed a Peel Regional Police EpiPen and arrived at an emergency at virtually the same moment as the paramedics.

“Had there been any delay with the paramedic arrival, the individual would still have received the epinephrine they required,” Alexis said. “It’s stories like that that make us really happy that people have access because it also empowers our employees to feel like they are making even more of a positive difference.”

Where are the EpiPens located and how are the staff trained?

The EpiPens are kept in the glass defibrillator cases, some of which contain stickers on the front to let people know they’re inside. In rare circumstances when there’s no defibrillator present, the EpiPens can be found in high-visibility green cases.

All our police officers and some of our civilian employees have received training regarding anaphylactic reactions and how to appropriately respond in a variety of situations involving the epinephrine auto-injector. They are also taught where the (roughly) 53 EpiPens can be found within each of the Peel Regional Police buildings.

Both Alexis and Ashley are doing what they can to help this stock epinephrine initiative grow. “Ashley and I had an opportunity this past January to present to the [Ontario Police Health and Safety Association] … to bring this idea forward to other police services in Ontario, and the reaction was really positive. We actually received a couple of requests for information on our program from them, and we’re hopeful that other police services will have the opportunity to follow our lead,” Alexis said.

“We certainly hope that other services will follow this lead because we obviously feel it’s really important,” Ashley said. “With food allergies on the rise as much as they are, the reality is that more people that are coming into our facilities are going to have food allergies, so the risk is only increasing right now.”

Thank you so much Ashley and Alexis for making a great impact and supporting this community! You both are community heroes!